Alpha Draconis has a grey torso and legs, black arms and hip, and dark grey hands. He usually wears dark grey shoulderpads and a black UFO helmet, although his shoulderpads are removed in his keychain and LEGO Racers. The torso, hip, legs, and helmet feature detailed printing, with black and neon green patterns and an emblem on his torso. Alpha Draconis's head is transparent flourescent reddish-orange with alien facial features.

In the World Club Magazine Time Cruisers comics, IXVIZIKIL's thighs and boots are red, reminiscent of Chamon. However, the rest of his colors match up with the minifigure, with the head design clearly confirming his identity. The art style interprets his vague face design as having a black lower jaw with two prominent fangs.

In the September–October 1997 issue of LEGO Mania Magazine, Alpha Draconis is the leader of the Alien UFO force from planet Humorless, battling Exploriens and Roboforce. Due to his helmet design and his bad breath, he is nicknamed "The Dragon". After being fended off by the Robo Stalker, he leads an invasion of Earth but is thwarted by the LEGO Maniac. Afterward, he is scared off by seeing how ugly his unmasked face was when it appeared on TV during an interview with the LEGO Maniac.

In a German UFO print ad included in Die tollsten Geschichten von Donald Duck, the Overlord is the general of the Zotaxians and conducts several negotiations with inhabitants of other galaxies.

In the Time Cruisers comics, IXVIZIKIL is the noble leader of the Star People. They are summoned by Izralda, who seeks their advanced technology. However, IXVIZIKIL instead meets Tim Timebuster, Ingo, and Count Bat, who claims to have summoned them to help fight against Izralda. He leads the Star People's UFO fleet into battle against Izralda, but their lasers are magically turned into harmless frogs. IXVIZIKIL nearly gives up, but assists Tim in his plan to wrestle away Izralda's magic wand, rendering her powerless. With the day saved, the Star People leave to travel to other galaxies, and IXVIZIKIL speculates that they may meet again someday.

In LEGO Racers, Alpha Dragonis is one of the CPU racers in Circuit 3 and Circuit 6, as the host of Alien Rally Asteroid. His minifigure parts are unlocked by defeating Gypsy Moth in Circuit 6.

IXVIZIKIL in the Time Cruisers comics 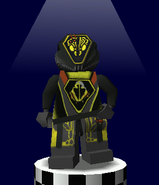 Community content is available under CC-BY-SA unless otherwise noted.
... more about "Alpha Draconis"
RDF feed
Accessories
Armor
Helmet +
Appearances
6975 Alien Avenger
6979 Interstellar Starfighter +
ArticleRating
4 +
Image
Ufo_alien_black.jpg +
InfoboxTemplate
Minifigure +
ShopDescription
ALPHA DRACONIS Alpha is the leader … ALPHA DRACONIS</br></br>Alpha is the leader of the Alien UFO force. His nickname is The Dragon because of how he looks with his mask on and how his breath smells. Everyone thinks that Alpha keeps his mask on because he's uglier than the mask, but the real reason is he scares himself when he looks in the mirror.cares himself when he looks in the mirror. +
Theme
Space +
Title
Alpha Draconis +
Years
1996 - 1997 +
Advertisement