Amos Diggory is a minifigure which appears in LEGO Harry Potter: Years 1-4. In the Harry Potter storyline, he is the father of Cedric Diggory.

Amos Diggory is a wizard who works in the Department for the Regulation and Control of Magical Creatures at the Ministry of Magic. He and his wife lost their son Cedric, when he was murdered by Wormtail on Lord Voldemort's orders.

He has a light gray hair, a light flesh head with glasses and a brown suit. 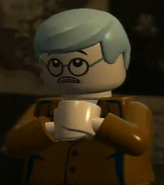 the instructions how to put Cedric back together