Angelica is a Pirates of the Caribbean minifigure that was released in the 2011 set, 4195 Queen Anne's Revenge.

Angelica has pale brown lips. She has a unique hairpiece with long, flowing hair like Syrena and Elizabeth Swann, but she also includes a large hat that is moulded over the hairpiece. She wears a green and gold waistcoat, and a white shirt. She also has black legs. She has a minifigure trophy printed to look like a Jack Sparrow voodoo doll.

Angelica was first introduced in the film, Pirates of the Caribbean: On Stranger Tides. Warning: Spoiler follows. Highlight section below to view content.
Angelica is the daughter of the dangerous and infamous pirate, Template:SpL. She faked being Template:SpL to recruit people to help her father find the Template:SpL. Angelica is still in love with Jack. She stopped Blackbeard from shooting Template:SpL and gets all of Blackbeard's youth from the fountain at the end of the movie. 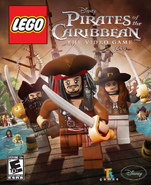 Retrieved from "https://brickipedia.fandom.com/wiki/Angelica?oldid=544292"
Community content is available under CC-BY-SA unless otherwise noted.