"Those monsters will be sorry they ever messed with me!"
―Ann Lee

Ann Lee is a minifigure introduced in the Monster Fighters theme.

Ann has sand blue legs printed with a clove of garlic, wooden stakes, and a belt. Her torso is white, and is printed with a sand blue desk, a red and white bodice, a white collar, and a silver necklace. She has white arms with yellow hands. Her hairpiece is reused from Cave Woman with a crossbow bolt instead of a bone. She has a facial scar from the Witch Nail.

Ann Lee is a Monster Fighter, proficient in the ancient art of broomstickajitzu. Her monster arch-enemy are the Ghosts, even though she is shown in videos with the Mummy. She met Dr. Rodney when Dr. Rodney was looking for a suitable pilot brave enough to fly into the Monster Realms, and was described as waiting in the air hangar for him. 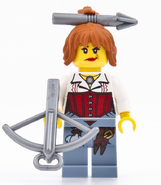 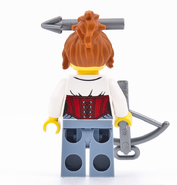 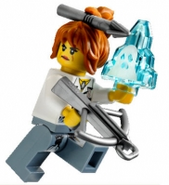 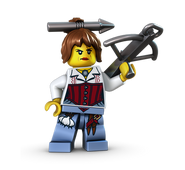 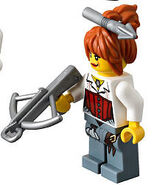