The Anubis Guards have black legs, printed with a gold and blue loincloth. Their chests are bare, depicting blue muscles on their torsos. They have black arms, and black hands. Their heads are large moulded pieces depicting the stylized jackal-head of the Egyptian god Anubis.

The Anubis Guards were skilled warriors reanimated by the pharaoh Amset-Ra to do his bidding. 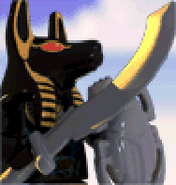 The Guard in LEGO Battles: Ninjago


853168 Pharaoh's Quest Magnet Set
+
ArticleRating
2 +
Image
AGW1.jpg +
InfoboxTemplate
Minifigure +
ShopDescription
The elite warriors of the Pharaoh’s legion … The elite warriors of the Pharaoh’s legions wear masks of the jackal-headed Anubis…or perhaps those are really their heads! Far smarter and stronger than the other mummies who serve Amset-Ra, the Anubis Guards are skilled fighters whose wrappings have been enchanted to make them almost as strong and tough to damage as stone. Whatever you do, don’t underestimate these powerful protectors of the Scorpion Pyramid!werful protectors of the Scorpion Pyramid! +
Theme
Pharaoh's Quest +
Title
Anubis Guard +
Years
2011 +
Advertisement