April is a teenager and sports an orange, wavy hair piece with a pony tail on the back and a yellow hairband on the top. She has a double sided head with one side having a happy expression and the other side having an angry expression. April wears a yellow sports jersey with a cream number 5 in the centre. She is wearing jean shorts with black stockings underneath.

April is an adult and has a dark red long wavy hair. Her face printing features cheekbones to give the face shape, dark red eyebrows, medium pink lipstick, and dual sided head featuring expressions of happy and anger. April sports a dark yellow leather jacket, unzipped to show her grey tank top with a dark grey design underneath and feminine curves. The back features the jacket's dark blue hood and the curves from the front. She has unprinted dark blue jeans.

TV: April was a normal, 16-year-old girl until she met the Turtles and the Kraang. She met the Turtles when they tried to rescue her and her father from the Kraang, but failed. They then came back and saved her, while her dad wasn't so lucky. She soon became good friends with them, mostly interacting with Donatello, who has a crush on her. Splinter eventually decided that April was ready to be trained to be a Kunoichi (Female Ninja), but she has never actually shown any ninja skills.

Movie: April was a TV news reporter whose life changed when she met the Turtles. 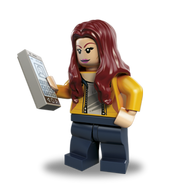