Aquazone was an underwater theme first introduced by the LEGO Company in 1995. The setting of all the Aquazone lines was the ocean, and usually involved two sides fighting each other for certain valuables (such as Hydrolator Crystals and other treasures). As the series progressed, new factions were introduced and the older ones were phased out of production. There were five subthemes of Aquazone. Its last new releases were in 1998.

Aquazone was the second entirely new LEGO System theme (after Pirates) that was introduced after the initial three classic major themes Town, Castle, and Space from 1978.

In the original Aquazone line, the heroic Aquanaut miners fought against the villainous Aquasharks and their leader, Thresher, for control of the crystal mines. The Aquanauts were a group of miners based at the Neptune Discovery Lab, who utilized submarines and submersibles of all shapes and sizes to look for Hydrolator crystals, which they depended on for survival and possibly trade.

The yellow base colour of the subs and the bowl-shaped cockpit pieces gave the Aquanauts a rather realistic appearance that was close to actual mini submarines. However, the second wave in 1996 brought a vessel that featured wheels.

The Aquasharks were villainous underwater miners who competed with the Aquanauts for control of crystals and crystal mines. The Aquashark subs sported a colour scheme that was similar to Space Police I and their streamlined design, with eyes and shark teeth on the cockpit windows giving them an aggressive appearance.

In 1998 the set 6100 Aquashark Dart was released. The colour scheme was unlike any previous Aquashark set. Only the minifigure's torso was a distinct Aquashark piece.

In 1997, the Aquanauts and Aquasharks subthemes were discontinued and the Aquaraiders were introduced as an alternate villain faction that competed with both the Aquanauts and Aquasharks. Their fleet consisted of three vessels in black with green accents and trans-neon green window pieces. The front windows sported stickers with angry eyes on them. The ships had accessories that looked like drills and grinders and had quite an exotic look for submarines. (Note that actual drills were not introduced until the release of Rock Raiders in 1999). One "ship" even featured an excavator bucket. Another one had wheels. The focus changed from simply collecting crystals to underwater mining.

A new theme called Aqua Raiders was introduced in 2007. This was not a part of Aquazone.

The final years in the Aquazone line involved a battle between the Hydronaut miners and the fish-like Stingrays. One of the main differences was that the Hydronauts would actually capture the Stingrays and lock them up in the Hydro Crystallization Station. The protagonists included Hank Hydro, Hip Waders, and Crystal Miner.

The colour scheme was similar the one of the Aquanaut line, the only difference being the transparent pieces which were now exclusively transparent green instead of blue and trans-neon orange. But the designs looked even more exotic than in 1997. Like the Aquanauts and Aquaraiders, the Hydronauts had also a wheeled underwater vehicle, but unlike their predecessors from 1997, they didn't make any use of drilling equipment.

The minifigures had unique masks printed onto their faces which gave them a very alien look.

The Hydronauts used suction cups to move their storage boxes in contrast to the commonly utilized magnets.

The Stingrays were fish-like mutants and enemies of the Hydronauts who used underwater vessels that resembled sea creatures like rays or crabs. The villains included Commander Manta Ray and Raven Ray, who despite his great intelligence, often found himself in a Hydronaut holding cell.

With the start of the Aquazone line some new pieces that later became ubiquitous were introduced. However there were also some pieces that were never seen again outside of this theme. 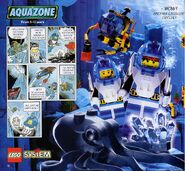 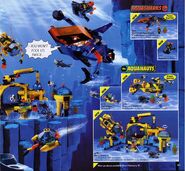