"Do not disturb the water."
―Aragorn to Pippin in The Lord of the Rings: The Fellowship of the Ring

Aragorn is minifigure from the theme The Lord of the Rings first released in May 2012.

Aragorn II Elessar was the son of Arathorn II, descendant of Isildur. As such, Aragorn was the sixteenth chieftain of the Dúnedain of the North, and the heir to the kingdom of Gondor. Aragorn was a member of the original Fellowship of the Ring, a sworn ally to Frodo, an old friend of Gandalf, brother-in-arms to Legolas and Gimli, and comrade to Boromir. When Boromir was slain at Amon-Hen. After the end of the War of the Ring, he became King of the Reunited Kingdom. He was the lover of Arwen Evenstar, and later, her husband.

Aragorn version of the teaser site 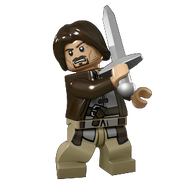 The back printing and alternate expression

Aragorn and Legolas in LEGO The Lord of the Rings: The Video Game

Aragorn as the king of Gondor in the Fourth Age

In the unlockable wallpaper from the Battle of Helm's Deep minigame 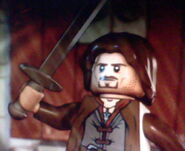 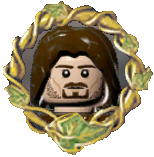 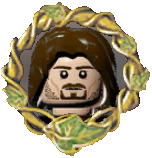 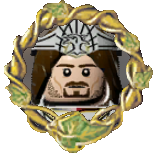