Warren Worthington III was a billionaire playboy mutant with angel wings on his back.

He became a founding member of Professor X's X-Men, which also included Jean Grey, Cyclops, Iceman, and Beast and left the team when it fell apart after a new generation of the team was created.

He later rejoined the team for a brief time until he left it again and became Archangel. After a brief solo career, he once again became an X-Man.

As a member he fought Sentinels and Magneto and his Brotherhood (including Mystique, Blob, Juggernaut, and Sabretooth) alongside Wolverine, Psylocke, Storm, Gambit, and the original team. During this time, he developed romantic feelings for Psylocke.

Outside the x mansion 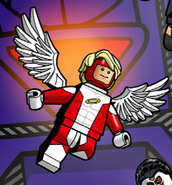