Aurora wears an orange visor and has feminine lips and eyelashes. She has the typical Arctic Explorer blue hoodie, bright orange jacket, and bright blue pants with holsters, although her torso features a unique print with curves commonly depicted on other female minifigures. She is sometimes depicted wearing reddish brown snowshoes, although this varies between boxart, instructions, and other official images.

In LEGO Quest & Collect, the Explorer is equipped with grey skis.

As an Arctic Explorer, Aurora lives in the Arctic Base Camp, located in the desolate wasteland of the inhospitable arctic tundra. Despite this, she acts cheerful and whistles a happy tune while walking through the tundra.[1]

In LEGO Worlds, the Arctic Explorer can be found randomly in the Frosty Forest and Polar Plains biomes. She offers a number of optional arctic-related quests, including photographing the Yeti or gathering huskies; after completing any quest, she can be unlocked for 1,250 studs.

In LEGO Quest & Collect, the Explorer is a Magic Attacker hero with the abilities "Beware the Yeti!", "Blizzard Warning", and "Freeze Removal".

In LEGO Legacy: Heroes Unboxed, Aurora is an Explorer healer with the abilities "Snowball Fight", "Gone Fishin'", "Cryotherapy", and "Brisk Taker". She is notable for her ability to quickly revive and heal teammates, especially with her synergy with the Arctic Ice Glider. 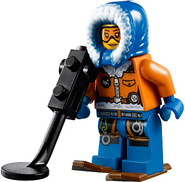 Aurora equipped with snowshoes and a metal detector 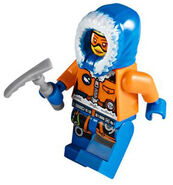 Aurora equipped with an ice pick


THEME: CITY
Braving the rough terrain and the extreme cold of the Arctic, Explorer enjoys searching remote areas for exciting new discoveries and hidden treasure. She'd love to find an extra pair of gloves one day! +  and A chill healer who revives allies once the … A chill healer who revives allies once they've gone cold. Living and exploring in subarctic temperatures year round, Aurora is practically a walking first-aid kit... if only she could remember to bring an ice pack.Trivia<br>An Explorer who thrives and survives in extreme environments, it turns out that living in a desolate, inhospitable wasteland is what you make of it! Now Aurora spends her time gleefully gallivanting across the unforgiving tundra, and whistling a cheery tune through several straight months of darkness. Out of all her incredible discoveries in the frozen north, Aurora's biggest one was proving that a person can definitely be too chill.First Snow<br>Premiered in 2014.Cryostasis<br>Appeared in one set.2014.