Argus Filch is a Harry Potter minifigure introduced in 2010.

The prototype at the Toy Fair and conceptual art for the Filch Minifigure figure showed him with brown hair, flesh coloured hands, and the head of the new Boba Fett. These were just preliminary images. The real version has grey hair and a different face, like the one in LEGO Harry Potter: Years 1-4. On the Harry Potter page on LEGO's website, Filch had yellow hands. However, the final version of Filch has keys printed on his belt, grey hair, a face with the same expression as the one on the teaser site, a more defined 5 o'clock shadow, and flesh colored hands. Argus Filch has a cat named Mrs. Norris. Unlike previous cats, Mrs. Norris has detailed printing on her for her face. Mrs. Norris was petrified in the beginning of Harry's second year by the Basilisk, much to Filch's anger.

He is the cranky caretaker at Hogwarts who is constantly trying to get Harry Potter and his friends into trouble. Filch is also a Squib, or a pureblood who cannot use magic. When Umbridge takes over the school in Harry Potter and the Order of the Phoenix, he is the only staff member to help her. 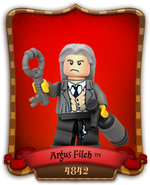 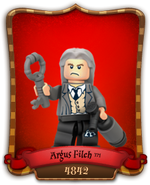 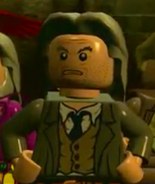 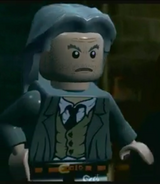 Filch about to announce the arrival of the Durmstrang Institute.

Filch (second from the right) in LEGO Harry Potter: Years 5-7 with Draco, Luna, Umbridge, and Neville. 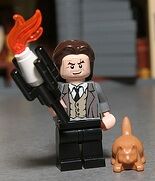 Filch and his cat, Mrs. Norris 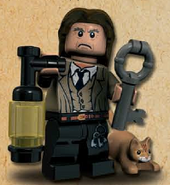