Ariel is a Disney Princess DUPLO Figure released in 2013. She appeared in two sets.

In 10515 Ariel's Undersea Castle, Ariel is a mermaid, and she has a new mermaid DUPLO piece in green, which is supposed to be her tail. She also has a flesh coloured torso with a sparkly purple seashell bikini on it and flesh arms and hands. She has long red hair and a happy face complete with pink lipstick and eyelashes.

In 10516 Ariel's Magical Boat Ride, Ariel has the DUPLO dress piece in blue like Cinderella's, and underneath her dress she has plain blue legs. She has a blue torso that is meant to be the top of her dress with a small bit of skin showing at the top; blue arms; flesh hands; and the same face she has in 10515 with the same hair, exept with a blue bow printed on the back.

Ariel was curious about humans. She and her best friends, Flounder the fish and Sebastian looked above water for humans. Ariel fell in love with a human named Prince Eric after saving him from drowning, and visited a witch named Ursula, who agreed to turn her into a human in exchange for her voice. Ariel agreed, but found it hard not to talk, stole her voice back and Prince Eric defeated Ursula, got married to her and Ariel became a human. 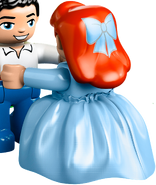