Artemis is a DC Comics minifigure who appears as a DLC character in LEGO DC Super-Villains.

Artemis Crock is the daughter of Lawrence Crock and Paula Brooks-Crock, also known as Sportsmaster and the original Tigress. Artemis follows the criminal legacy of her parents, originally using her own name, but currently known as the second Tigress. She worked alongside the second Icicle, other second-generation legacy villain, in Injustice Unlimited and the latest rosters of the Injustice Society, and they eventually fell in love and married. Tigress has a tiger paw tattoo on her left eye, so she wears shades when going incognito. 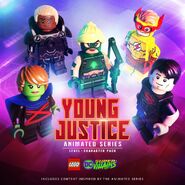 Add a photo to this gallery
Retrieved from "https://brickipedia.fandom.com/wiki/Artemis?oldid=1965731"
Community content is available under CC-BY-SA unless otherwise noted.