Arthur Weasley was an employee at the Ministry of Magic and the husband of Molly Weasley. He also owned an enchanted flying car. Mr. Weasley is fascinated by Muggles (non-magic people) and is always asking Harry Potter and Hermione Granger how things in the Muggle world work. He was also a member of the Order of the Phoenix. He lives in The Burrow with his children. He protects Harry and his only daughter, Ginny Weasley from Bellatrix Lestrange and Fenrir Greyback when they attack his house.

Although the shop image for The Burrow shows him with a light green coat, yellowish-white vest, grey pants, red shirt, and orange tie, the actual mini-figure (as seen in the teaser CG photo of him) has a plaid shirt underneath his green coat. He also has red hair (a characteristic of all the Weasleys) and the hair piece like the one Mutt Williams has but ginger. In the video game, he has a same torso of Henry Jones, but with a red bow tie, red vest and coat and the same hair as Vernon Dursley.

Arthur Weasley (b. February 6, 1950) was a pure-blood wizard in the employ of the Ministry of Magic, as well as a member of the second Order of the Phoenix. He was a staunch believer in the equality of all magical and Muggle people and the patriarch of the Weasley family.

Arthur was born to Septimus and Cedrella Weasley and had at least two brothers. He attended Hogwarts School of Witchcraft and Wizardry from 1961 to 1968 and was sorted into Gryffindor house. Soon after graduating, Arthur married Molly Weasley. During the First Wizarding War, he and Molly had six sons — Bill, Charlie, Percy, twins Fred, George and Ron — and a daughter, Ginny and was not a member of the Order of the Phoenix, but it is unknown if he in any way participated in the first war. At some point after graduating from Hogwarts, Arthur began working for the Ministry, in the Misuse of Muggle Artefacts Office. In 1996, he was promoted to head of the Office for the Detection and Confiscation of Counterfeit Defensive Spells and Protective Objects by the new Minister for Magic, Rufus Scrimgeour. When the Second Wizarding War began, Arthur joined the Order. While guarding the Department of Mysteries, he was attacked by Lord Voldemort's pet snake Nagini, but he made a full recovery. Arthur participated in the Battle over Little Whinging in 1997 and the Battle of Hogwarts in 1998, in which he lost his son Fred which he was devastated by, however he survived the war. After the war, he saw his family expand even further with the marriage of many of his surviving children. 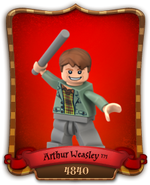 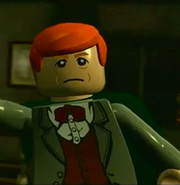 Arthur Weasley in the video game 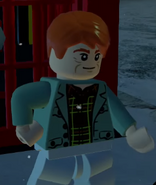