"Frodo's dying. If I get across the river, the power of my people will protect him. I do not fear them!"
―Arwen in The Lord of the Rings: The Fellowship of the Ring with translation of the first sentence

Arwen Evenstar is a minifigure from the theme The Lord of the Rings. She appears in 79006 The Council of Elrond.

Arwen has a long brown hairpiece that has flesh-coloured ears on the sides and wears a sand blue Elven dress which is mainly her ranger outfit. This minifigure does not include the grey gloves on her hands that were seen in the movie. She has a reversible face; one side has a calm expression and the other - an angry one.

From LEGO The Lord of the Rings: The Video Game during Frodo's hallucinations

Arwen tries to prevent the Ringwraiths from coming after Frodo

Arwen summons her power to wash away the Ringwraiths 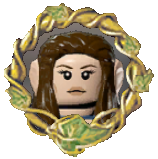