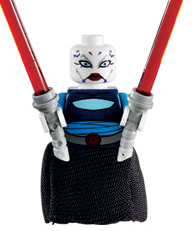 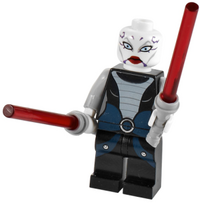 Asajj Ventress is a minifigure based on the Dark Jedi of the same name in the Star Wars universe. Ventress was first released in the year 2008, for the Star Wars: The Clone Wars theme.

Asajj Ventress is a playable character in LEGO Star Wars III: The Clone Wars. Her appearance is based upon her original minifigure, however black eyes with white pupils replace her The Clone Wars eyes. She has several abilities, including being able to double-jump, attack with her lightsabers, perform a lightsaber throw, use the Force on objects (including objects which can only be interacted with if the user is aligned with the Dark Side of the Force), choke enemies with the Force, cut through certain walls with a lightsaber, and wall jump up certain areas. 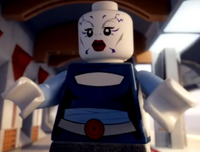