Ashlee Starstrider is a Galaxy Squad minifigure released in 2012. She is exclusive to the Bug Obliterator set.

Ashlee Starstrider has orange legs, an orange waist, a light-grey torso, orange arms, and black hands. Printing on her legs and torso depicts knee-pads, her armour-padded uniform, and the Orange Squadron's insignia on the left side of her chest. She has a yellow head, which is double-sided. On one side she has black eyebrows, black eyes with eyelashes, white pupils, and is sporting a smile with blue lipstick. The other side of her head is identical to the first side, except a grey breathing apparatus is printed in place of her mouth. Her helmet is the same mould as that first used by the Space Police III Commandos, except in orange and with a clear, transparent visor.

Ashlee Starstrider is a member of Orange Team. She is known to have fought the Alien Mosquitoids. 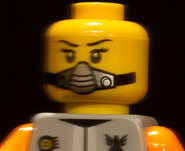 A CG image of Ashlee