Aspheera is a snake sorceress and Pyro Viper minifigure from Ninjago: Masters of Spinjitzu.

Aspheera's head and shoulder armor molds were recast in brown; both were used for the Pyro Destroyer, the head for Pyro Slayer, and the armor for Pyro Whipper. She has a unique printed torso, depicting tan and gold robes. Her ghostly lower body is an orange and yellow recolor of the ghost piece introduced in 2015, previously used for Ninjago characters like Nadakhan and the 2019 Overlord.

The in-show model for Aspheera features more organic/cartoonish texturing. Her shoulder armor appears smaller, as more of her torso print is visible. In place of her ghost tail, she has a golden and fiery snake tail similar to most Serpentine generals. Prior to gaining fire powers, her scales are shown to be blue, though her eyes remained yellow with red irises.

In "The News Never Sleeps!", Ninjago City is invaded by Aspheera's fire snakes, who descend from the sky in balls of fire. In "Ninja vs. Lava", her mummified Serpentine minions are awakened in the pyramid by her lava flow. In "Snaketastrophy" Aspheera, having arrived in Ninjago City, goes on the news to announce her intentions to its residents. 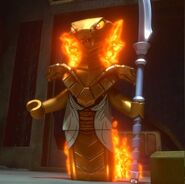