The Astronauts, also referred to as the Astros[1] and Earth Command,[2] are the heroes from Mars Mission line who are from Earth and wear white and orange suits, with a white helmet and gold visor. There are at least nine astronauts in the team.

Unlike other named team members, the Trooper debuted in the 2008 sets and was never named by the website or given an official bio. 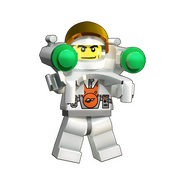 
Astronaut pilots the spaceship that delivers vital supplies to the Space Police. The law-enforcers rely heavily on Astronaut's expertise, allowing them to get on with crime-busting around the cosmos. +
Theme
Mars Mission +
Title
Astronaut +
Years
2007 - 2008 +
Advertisement