Brickipedia
Register
Don't have an account?
Sign In
Advertisement
in: Articles which use text from other sources, Atlantis, Themes,
and 3 more
English

This article is about the Atlantis theme. For the game with a similar name, see 3851 Atlantis Treasure.

Atlantis is a theme released in January of 2010[1]. The plot revolves around a team of underwater explorers searching for the sunken city of Atlantis, and its sets include models of futuristic submarines, giant sea monsters and ancient underwater sites. The sets include many new minifigure head moulds as well as a new breathing apparatus for the human characters, exclusive keys available in six collectable variations - Crab, Squid, Shark, Manta Ray, and Turtle, with the sixth key from 7985 City of Atlantis featuring a geometric design - and other new elements. There is a movie that accompanies the Atlantis theme that was played on Nickelodeon, on LEGO.com with the completion of that site's Atlantis games, and at LEGOLAND California Carlsbad, at the end of the Sea World exhibit.

In mid-November 2009, a teaser website for the Atlantis theme was put up on LEGO.com. The full site was released on January 5 2010 (US, UK, western Europe), January 7 (Central and Northern Europe), January 18 (Southern and Eastern Europe), and April 1 in Japan.[2] The teaser website had very little - the main feature was a downloadable program known as the "Map to Atlantis." It had a daily fact about sea life, a map of the route to Atlantis with "speculation" on the different areas, as well as a link to LEGO.com and a few other features.

On January 15th, Cartoon Network released LEGO Atlantis: The Movie (which featured actual voices, unlike the previous mini-movie Indiana Jones and the Raiders of the Lost Brick) which included all of the sets from January (except the limited-edition 8079). It is a huge LEGO theme

Most of the sets include stickers that feature that set's product identification number.

The colour scheme for the divers was changed in the 2011 sets, with the elements that would previously have been green now coloured yellow. The story was also changed; insted of searching for keys, the Atlantis crew searches for the golden armor of the king of Atlantis in order to reunite the ancient city.

Atlantis features a group of explorers that are searching the sea floor for the eponymous lost city of Atlantis from ancient myths. They are equipped with a wide array of red futuristic underwater vehicles with light green viewports and weaponry. During their quest, they encounter giant guardians, as well as the warriors of Atlantis, which include Sharks, Squids, and Manta Rays in humanoid forms. The sets of this theme include either the vehicles of the explorers, ruin sites or single guardians (or a combination of these).

The theme reprises several elements from earlier underwater LEGO themes, but combines them with a new distinctive look and an unprecedented setting. The concept of underwater treasure hunters came from Aquazone (1995-1998), Divers (1997), and Aqua Raiders (2007), with the latter two being of a more modern design, and the former being of a more futuristic design. Atlantis introduced more futuristic vehicles, as did the earlier Aquazone theme, but the new designs in Atlantis bear little similarity to those of previous LEGO submarines, a look which is reinforced by the red and light green color scheme, which was never seen before in an underwater theme. The new theme also has a more elaborate back story than its predecessors, showcased on a dedicated website. In addition to this, all included minifigures (from the hero faction) portray individual, named characters, a concept that was also put to use in the Power Miners line from 2009. The villains in Atlantis are underwater creatures that have regular Minifigure bodies coupled with monstrous heads. Previous underwater themes featured antagonists that were other groups of humans, while some did not feature any villains at all, or rather pitted the main characters against giant sea creatures.

Long before the actual setting of the theme, the aliens from the Alien Conquest theme had captured the The Golden King and gave him to the Atlantis Creatures, rendering the city of Atlantis unprotected and allowed the Dark Guardians to overtake it, as well as steal the five Keys to Atlantis, in exchange for weaponry for their army. According to The Secret Journal of Dr. Artimus Rhodes, a 1919 scientist named Dr. Artimus Rhodes found a lost pyramid-map to the city of Atlantis on the shores of Mexico, and eventually embarked on the quest to find the city, only to fail and be knocked unconscious, losing his memory of his journey in the process. After being rescued by his beautiful lab assistant, Ms. Morris, he asked for her hand in marriage, to which she accepted, and gave birth to an unnamed son. Later, in the last pages of the book, Ms. Morris writes to Samantha Rhodes, who is revealed to be the granddaughter of Artimus Rhodes. Now a young adult, Sam finds the map and the book and learns of her grandfather's quest, and tricks the Deep Sea Salvage Crew into helping her look for the lost city and find the magical keys that will unlock the Portal to Atlantis. After completing their quest and making their way into the city, as well as recruiting Dr. Brains into the salvage crew, they discover the city has been trapped in eternal darkness by the Dark Guardians, who have kept the Golden King prisoner since his capture by the aliens. After finding all of the Golden Treasures of the city, the crew is captured by the guardians and taken the king's palace, who is a prisoner of his own dungeon. In an attempt to escape the palace and defeat the guardians, Samantha hatches a plan to send a remote-control submarine to the surface world and attaches her grandfather's journal to explain the situation. After receiving an unknown source of help, the five crew members defeated the guardians and helped rescue the city from darkness, and returned the Golden King to his rightful place as ruler of Atlantis. However, in a master plot to enslave mankind, the Alien Commander abducted the king and used his magical trident, along with Amset-Ra's magical treasures, in an attempt to overthrow the Earth and rule the world, however, the plan failed, but a new plan was hatched to travel back in time and unleash an army of dinosaurs on the city, which resulted in the Dino theme.

In 2011, when the salvage crew searched the ruins of Atlantis, the diver Bobby Buoy was dropped from the theme and replaced by the Power Miners character Brains and renamed "Dr. Brains". The theme crossover was officially announced in Lego.com's description of the set Dr. Brains is featured in, 7984 Deep Sea Raider, that he was recruited after completing his mission underground. Another crossover was featured in a comic in the Nov/Dec edition of LEGO Club Magazine where it was revealed the Aliens from Alien Conquest delivered the technology of the Treasure Keys and the Portal to Atlantis to the Atlantis Warriors. Later the Alien Commander used his UFO to kidnap The Golden King and use his power along with Amset-Ra and the 6 Golden Treasures to try and conquer the world. However it was an ultimate failure and caused the aliens to be forced to retreat.

In the September issue of the LEGO Club Magazine, a pull-out poster was released, showing a radar screen with a red dot that marks the position of Atlantis. Also, the date 1/1/2010 is mentioned, suggesting a release or further announcements at the beginning of the next year. Below is an English translation of the promo poster.

Not long after this poster was found, several sets were on display at a Russian Toy Event along with select other 2010 LEGO sets.

In mid-November, several lucky individuals managed to find the sets 8056, 8058, and 8060 in their local Toys-R-Us stores and, subsequently, several of the parts and sets have been appearing on Bricklink.

In the meantime, a teaser site for Atlantis was included on LEGO.com. It did not contain a great deal of detailed information, but featured a minigame in which users can "navigate" the bottom of the ocean and find some of the hidden secrets. There was also the secret journal as mentioned above, as well as a downloadable desktop icon which provides free, high quality desktop images available for download, as well as information concerning some of the theme's key locations.

As of December 1st, all Atlantis sets, including the two impulse sets, were released for the Christmas holidays in the US. These are 8072 Sea Jet and 8073 Manta Warrior.

In the UK January 2010 edition of the LEGO Shop@Home Catalog, a new piece of information on the Atlantis theme was included. The information is written below: "The Deep Sea Salvage Crew were a team of hard-working divers and explorers who searched the ocean depths for shipwrecks and sunken treasure. Then they found their first clue to the location of the long-lost city of Atlantis, a civilisation that disappeared beneath the sea thousands of years ago. Now they have a name and a new mission, as the ATLANTIS Deep Sea Salvage Crew combs the deepest and most dangerous parts of the ocean for the ancient treasure keys that hold the secret to finding Atlantis and unlocking its mysteries!"

TLC's internal magazine "The Brick" revealed that the theme will be continuing with new sets and a new storyline in 2011. The new storyline starting in January 2011 will be called the Quest For the Golden King. A preview for the plot appears when you finish chapter 5 of The Atlantis Adventure.

"Congratulations! You have discovered the Long Lost City Of Atlantis, but our journey is far from over. Inside this majestic temple, a new adventure awaits Captain Ace Speedman and the rest of the Atlantis crew. beware that dark gaurdians lurk inside. These villans stand between you and finding the ultimate treasure- THE GOLDEN KING!

Stay tuned for the continuation of the Atlantis Adventure. THE QUEST FOR THE GOLDEN KING. Coming January 2011."

An image of the Golden King is featured on the Atlantis homepage. 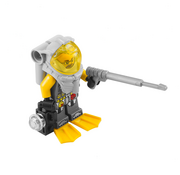 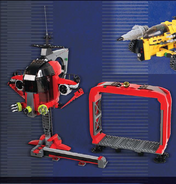