"Fun fact, at a subatomic level dead ends aren’t really dead ends at all. There is always space between the molecules that allow atoms to move between them."
―The Atom in LEGO DC Comics Super Heroes: The Flash

The Atom (known as Ray Palmer) is a DC Comics Minifigure who first appeared in LEGO Batman 3: Beyond Gotham. He made his physical debut at San Diego Comic-Con International 2016 as a part of a raffle.

The Atom's physical appearance is on his appearance in the Arrowverse TV shows Arrow and its spin-off DC's Legends of Tomorrow.

Raymond "Ray" Palmer, is a physicist and professor at Ivy University in the fictional city of Ivy Town, somewhere in New England, specializing in matter compression as a means to fight overpopulation, famine and other world problems. Using a mass of white dwarf star matter he finds after it lands on Earth, Palmer fashions a lens that enables him to shrink any object to any degree he wishes. Compression destabilizes an object's molecular structure, however, causing it to explode.

During a spelunking expedition, Palmer and his students, along with his girlfriend, lawyer Jean Loring, find themselves trapped in a cave. In desperation, Palmer secretly uses the lens he has carried with him to shrink himself in order to be able to climb through a small opening in the fallen rocks sealing the cave, knowing he will likely explode. Using a diamond engagement ring, Palmer enlarges the hole sufficiently and descends to the floor to try to alert the others of the escape route before dying. However, upon entering the lens' beam, he finds himself returned to normal size and without danger of exploding. As the lens is covered with cave moisture, Palmer believes this has altered the beam to allow this strange effect. When subsequent experiments still result in objects exploding, Palmer concludes some unknown force in his own body allows him to safely size-shift. He decides to use this effect to become a superhero.

Palmer creates a belt tool to control his miniaturization to subatomic size with an emergency backup mechanism in his gloves, and develops a costume that he can wear at most times that only becomes visible when he shrinks significantly. In addition, he develops equipment that allows him to decrease his weight in addition to his size, allowing him to glide on air currents on a low setting, while a high setting allows him to handle or strike objects with the equivalent strength of his normal size and build. A favorite travel method is to call some location on the telephone and when the phone is answered, Palmer can shrink enough to travel through the phone lines in seconds to emerge out the answering phone.

He carries out the bulk of his early superheroic adventures in Ivy Town, where he often helps his girlfriend, Jean Loring, win her cases. Much later, he gains the innate equivalent powers within his own body.

Palmer has fought against several alien and supernatural threats, as well as having his own rogues gallery: his arch enemy is Chronos the Time Bandit, the menace of the Bug-Eyed Bandit, the dangerous eco-terrorist Floronic Man, and the miniature misguided Bat-Knights of Elvaran. He also had several time travel adventures by means of Professor Alpheus V. Hyatt's Time Pool. The Atom is a member of several incarnations of the Justice League, and the team is gracious enough to supply a special chair scaled to his default size which can elevate to whatever height needed so he can easily partake in team meetings without having to go out of costume. There, he meets Hawkman, one of his closest friends in the superhero community. Neither character achieved major popularity, and even in their heyday were mostly supporting characters, often with Palmer as a specialist in size alteration who was often needed to access extremely confined areas only he could access. Hawkman would manufacture prosthetic wings for a myna Ray saved, taking on the name Major Mynah and became the Atom's partner and steed.

Atom with its own minifigure plate 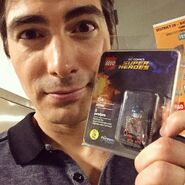 Actor Brandon Routh with his minifigure counterpart at Comic-Con 2016