Aurora, also known as Sleeping Beauty and Briar Rose, is a Disney Princess Mini-Doll. She appears in seven sets.

Aurora wears a bright purple dress, with light purple swirls printed at the bottom. Her torso is bright purple, with a white triangular neckline. Swirls of light purple are printed in the bottom right corner. She wears full light purple sleeves. Her face is light nougat. She has a closed smile, decorated with bright purple lipstick. Her eyes are violet, with curved black eyebrows above them. Aurora's hair is long and blonde, its fringe and rear end is curly. At the top of her hair she wears a golden crown.

Sleeping Beauty has white, unprinted legs she wears a light pink removable dress. Her torso is pink, and printed with a spiraling silver design. She has short, pink sleeves, and light nougat arms. Her head, also light nougat, features large slanted blue eyes with dark pink eyeshadow, and a small mouth with pink lipstick. She has blonde hair, and wears a golden crown. The 2014 figure is a little different from the 2012 figure: her eyelashes are more detailed and she has sparkles on her torso.

At the christening of King Stefan and Queen Leah’s child, the king and the queen invited everyone to attend the celebration. Lord Duke the herald announces Prince Phillip, King Hubert, and Flora, Fauna, and Merryweather. However, they didn't invite Maleficent. Maleficent came anyway, furious at not being invited, and put a curse on the princess that when the princess became 16, she would prick her thumb on a spinning wheel and fall asleep. Though Merryweather weakened the spell, Aurora (the princess) could be awoken from her slumber by her true love.

The three fairy godmothers hid Aurora in a cottage and raised her as their own. One day she met Prince Phillip in the woods and fell in love.

On her birthday, when the princesses was returned to the castle as promised, she then pricked her thumb, and everyone in the castle fell into a deep sleep. To the rescue came Prince Phillip, who got into the castle and went up the tower, where he saw Aurora sleeping. He kissed her, and everyone woke up. The two of them then began to start dating.

Sleeping Beauty with her dress removed 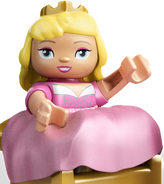 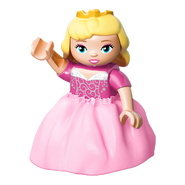 2014 figure with a bit more detail