Brickipedia
Register
Don't have an account?
Sign In
Advertisement
in: Class 3 articles, The Hobbit: The Desolation of Smaug minifigures, Minifigures introduced in 2013,
and 3 more
English

The Desolation of Smaug
The Battle of the Five Armies

Azog is a minifigure that was released in December 2013 appearing in the The Hobbit: The Desolation of Smaug subtheme. Azog minifigures were released early in a giveaway at the 2013 San Diego Comic-Con and were given away to random visitors. Later, he was released again in set 79014 Dol Guldur Battle.

Azog has light skin, almost pale, with one hand brown and the other with a unique, claw-like prosthetic hand. He has the similar legs to the Mordor Orcs, only a small difference in it being more tattered, a studded belt, and the skin colour that is noted.

Azog has a unique headpiece, showing blue eyes, scars all over his face, small, pointed ears, and a malicious smile. A nose has been moulded into it, for detail.

Azog the Defiler was a Gundabad orc chieftain. He fought the dwarves of Moria and killed Thrór, the grandfather of Thorin Oakenshield. Thorin then cut Azog's arm off and the latter retreated. Years later he returned with a metal claw replacing his missing arm and swore to take revenge on Thorin with an Orc pack following him. When Yazneg, the leader of the pack came back to Weathertop where Azog was camping, after a failed attempt of capturing the dwarves, Azog was angered and threw Yazneg to the Wargs. After the company of dwarves escaped Goblin Town, they were found by Azog and his pack of Orcs and Azog attempted to kill Thorin. When one of Azog's Orcs was preparing to cut Thorin's head off, Bilbo Baggins proved courage and saved the latter. Afterwards, the Great Eagles came and killed most of the Wargs and Orcs of the pack, and saved Thorin's Company, leaving Azog angrier than ever. Later Azog was called to Dol Guldur by the Necromancer who commanded that Azog would be the leader of the army of Orcs and Wargs, therefore Azog gave Bolg- his son the task of chasing the dwarves. When Gandalf went to Dol Guldur, Azog and his legion attacked him and imprisoned him in a cage after the Necromancer defeated the wizard. Azog later commands his army and leads them in the Battle of the Five Armies. Later he duels with Thorin one last time in Ravenhill and is killed by the dwarf. 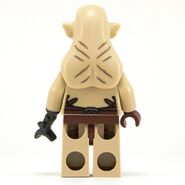 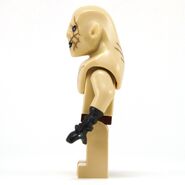 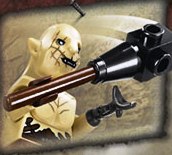 Azog and the Necromancer attacking Gandalf

Azog on his white Warg

Azog with his hand chopped off by Thorin 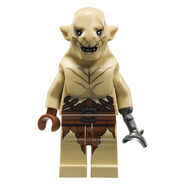