BB was a worker for the humans in Life on Mars. He appeared in 7315 Solar Explorer as co-pilot for Mac. He has ginger hair with long bangs. He appeared with an EMU (Extra Vehicular Mobility unit). He also appears in the video game LEGO Racers 2 next to a building at the crash site of the shuttle with which the player came to Mars. He tells the player of a vortex in the abandoned Martian base.

According to LEGO Mania Magazine(among other sources), BB is a kid who won a competition to be one of the first astronauts to go to Mars. He was introduced into the preceding theme, Space Port.

In the January-February 2001 issue of LEGO Mania Magazine, he was described as such: "Ever since he was a baby, BB was interested in space. BB won a worldwide space explorer contest and the prize was a trip to Mars!" 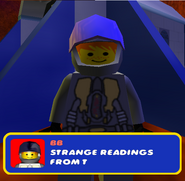