BILOfix was a short-lived product released by LEGO containing both wood and plastic elements.

On 4th February 1960, the LEGO department for wooden toy production was struck by lightning and burned down for the third time. After much consideration, it was decided to discontinue production of wooden toys and to concentrate solely on plastic toys. As a result, two of the brothers, Karl Georg and Gerhardt, decided to leave the LEGO company and start their own separate business, BILOfix.

Gerhardt Kirk Christiansen established the BILOfix company in Kolding, Denmark, in February 1962, where a new 3,250 square metre factory was built. At this time, 90% of the factory's production was sold in Scandanavia, Italy, United Kingdom and Germany.

Trade literature issued in 1967 in the UK by BILO TOYS LTD. features BILOfix products throughout, but shows the BILOfix and BILOtoy logos with equal prominance on the front cover, so we know that BILOfix was still available in the UK in 1967. BILOtoy products were then marketed under the Revell toy brand from 1969–1972.

The German "Hobby Katalog" and the French "Catalogue général" from 1970 listed 6 pages of BILOtoy products plus a further page of BILO "earlyplay" products for pre-school children. Unfortunately, Revell decided to discontinue the BILO products in 1972 because of "high price increases from the Danish manufacturer" which Revell felt "would not be acceptable to the German market".

At some time, presumably after 1972, BILOtoy was renamed Hanse Tec. There is evidence of a BILO Tec branded product, which possibly appeared during the transition period. Small print on Hanse Tec packaging indicates that two companies were associated with this final reincarnation of BILOtoy, K-E Mathiasen A/S of Denmark and BorneLund of Japan. 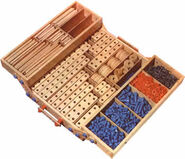