BIONICLE: The Game was a LEGO video game created by Argonaut Games and Published by Electronic Arts and LEGO Interactive in 2003. It was released for the Nintendo GameCube, Xbox, PlayStation 2 and Microsoft Windows. The Game Boy Advance version was published by THQ.

The Mac OS X version was released by Feral Interactive in 2004.[1]

It depicted the events on Mata Nui, from the rise of the Bohrok to the final clash of Makuta and Takanuva.

The game follows the 2001-2003 storyline with only one obvious omission; the first part of the 2001 story, when the Toa first face Makuta, was cut out. However, many parts of the story were "reduced." The game begins when the Bohrok are attacking Mata Nui, and spends two levels depicting Tahu and Kopaka's battles with them. After that, the game moves on to Gali Nuva's level, in which the Bohrok Kal are introduced, and all defeated at once by Gali. In the storyline, Tahu Nuva uses the Kanohi Vahi, mask of time, to allow himself and the other five Toa to defeat them. Pohatu's level then depicts a "midpoint" between storylines; Pohatu is delivering the news that the Rahkshi have awakened to Onua. Onua then defeats Lerahk in his level by dropping a hub unit on Lerahk , Lewa fights Panrahk in his level, and Tahu lava-surfs after Kurahk, who has made off with the Mask of Light. When he catches Kurahk, the Mask of Light fuses itself to Takua, who becomes Takua Nuva and defeats Makuta, lord of shadows, in the game's final level. He transforms on Takutanuva and opens the door and awakes Mata-Nui. The Turaga and Matoran only make a couple appearances, none of which are very significant to the plot.

Basic controls include using shields and light elemental blasts to defeat enemies and open canisters. Introduced in the game are "Masks of Elemental Energy" (which grant health and power) and Energy Spheres which grant health. Overall, there are levels in the game including the boss battle against Makuta. A few continuity errors were made, such as Lewa Nuva picking up a Krana after beating Panrahk, when it should have been a Kraata.

The Toa have defeated Makuta and are enjoying a play put on by Turaga Vakama, Turaga Matau, and 4 Matoran. Suddenly, Takua comes with 3 Tahnok and a swarm of Nui-Kopen in hot pursuit. Tahu deflects one of the Bohrok's attacks at it and the other 2 run away as soon as they see their unconscious ally. Lewa saves 2 of the Matoran from the Nui-Kopen. Gali suggests that the Toa return to their Wahi and deal with the Bohrok.

Tahu returns to Ta-Wahi and Turaga Vakama tells him of the danger. Tahu rescues the Matoran and in turn they build a "friendly Rahi" to help run a conveyor belt to open a door leading to a swarm of Kohrak. After defeating them, Tahu picks up a Krana. It attempts to take over his mind but Tahu resists. Suddenly, Takua comes up, revealing he has found a new mask, but Tahu ignores him and tells him to return to Ta-koro.

Tahu later travels to Ko-Wahi and tells Kopaka in order to defeat the Bohrok, he must capture the Krana. Kopaka then says he is chasing a Gahlok and that he is heading for Ko-Kini. Kopaka then heads down the mountain and meets up with Nuju who tells him that the Gahlok tunneled through the mountains and is heading for Ko-Koro. Kopaka chases after and defeats it. Nuju then tells him that the swarm leader, a Tahnok, has fled down the mountain. Shortly after Kopaka goes after it, the Tahnok pushes a massive boulder down the mountain. Kopaka evades it and informed by a Ko-Matoran where the Bohrok went. Kopaka defeats the Tahnok and grabs the Krana.

Later all the Toa reunite with Krana and unexplainably transform into Toa Nuva. The Toa return to their Wahi and return to protecting the island.

Gali returns to Ga-Wahi to find Nokama. Nokama warns Gali that the Bohrok-Kal are terrorizing the Ga-Matoran. Gali catches up to the Bohrok-Kal and defeats it easily. Suddenly, Takua comes up and tells Gali of the Rahkshi and that one of them was heading for Onu-Wahi. Gali decides to head there and warn Onua.

Along the way, she runs into Pohatu in Po-Wahi and tells him about the Rahkshi. Pohatu says he will warn Onua and Gali should warn Lewa. Gali agrees and points out a Po-Matoran waving and jumping for help, it is unknown why though. Pohatu goes to rescue him but then an earthquake creates a giant pit that he and the Matoran fall in. They both land safely but can't get out. Then the Matoran tell him the they must use a Mine Cart to get and hit Six switches to get to Onu-Wahi. When Pohatu get there and tells Onua about the Rahkshi then attacks Onua then Enua tells Pohatu to get Tahu. Then Onua gives the Rahkshi a "real Onu-Wahi welcome" and attacks the Rahkshi but he falls down, then the ground gives way.

Onua lands safe but go on to defeat the Rahkshi. On the way he has to push heavy rock statues on switches to open the doors he needs to go through in order to get to the Rahkshi. He then defeat it by pushing the same statues on devices that fire the statues at Lerahk.

Gali warns Lewa of the Rahkshi, but Lewa cant reach it without his flight powers. He has to get six matoran so they can activate his Suva and bring him his powers back. He then finds Panrahk on a set of fleets, he destroys all around Panrahk and it falls out in the water and drowns.

Tahu is talking to Takua, which is telling him of the mask he found: the mask of life, and that Kurahk took it. Then Pohatu comes and tell Tahu of the Rahkshi, Tahu says he will get the mask of light back from Kurahk. He gets past the Rahkshi and to Ta-koro before it, Kurahk looses the mask, and it gets stuck on Takua's face, transforming him into Takanuva and teleporting him to Makutas lair.

Takanuva arrives behind Makuta and Makuta says he will defeat him, he calls for several rahi to fight for him, but they are no match for Takanuva. Then, Makuta destroys the floor and it falls down a shaft with Makuta. Takanuva follows and defeat Makuta.

Takanuva melds his powers with Makuta, balancing light and dark, and awakens the Great Spirit.

During the course of the game, the player takes the roles of the following Toa: 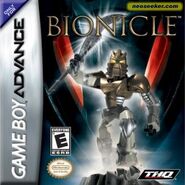 Retrieved from "https://brickipedia.fandom.com/wiki/BIONICLE:_The_Game?oldid=1937413"
Community content is available under CC-BY-SA unless otherwise noted.