Storywise, the game is non-canonical and is loosely based on the BIONICLE Legends story arc, along with featuring various characters from the previous arcs in the franchise.

All the versions of the game are the same, with the exception of the Nintendo DS and Gameboy Advance versions. While the game came out on most platforms in 2006, it came out with its Xbox 360, Nintendo Wii, and Nintendo DS versions in 2007. It should also be noted that this game is the first LEGO game to be rated T for Teen by the ESRB.

It is thought that the console version picks up where the Mobile and GBA versions left off. The game starts after showing the logos of the company that made it. Jaller's Toa canister is seen washing up on Voya Nui after staying in the canister following the first defeat of the Piraka. Waiting there until help was needed again. The canister's lid is seen getting kicked-off. And Jaller runs out to a place where Balta is siting. Balta quickly explains that Vezon and Fenrakk have used the Kanohi Ignika (the Mask of Life) to rebuild the Piraka along with the Rahkshi, Titans, Vahki, Visorak, and Bohrok. Balta then takes the Kanohi Calix (the Mask of Fate) out of a storage unit and puts it on Jaller's face telling him to defeat the villians and to recover the Ignika. The camera then zooms out to show an overview of the island while at the same time showing the rest of the Toa Inika (Jaller's team) walking towards Jaller.

It features each of the Toa Inika, and they carry one of three different weapons: the tool of the elementally corresponding Toa Mata, the tool of the corresponding Toa Metru, and finally their own tool featured in their set. They upgrade from one weapon to another as the player buys them in the Matoran Enclave. The player fights many enemies spanning all over the BIONICLE world, from Rahkshi to Visorak, as well as some familiar mini-bosses, like Sidorak and Roodaka. The player can unlock different abilities that help them unlock bonus canisters, and once a Piraka is defeated, they can be played as in their zone. However when you defeat Vezon, you cannot play as any of the other Piraka, but Vezon still has all the Piraka's abilities.

Each Toa had thier own unique skill set and abilites. They also had a vey expensive special ability that had to be bought from the matoran enclave.

The Bohrok are a common enemy in the game. They are not very powerful, but quite versitile. They are the only enemies that can fly. While flying, they are both slow and vulnerable. While on the ground, they become tougher, and while in close range, they can roll up into a ball and hurl themselves at the player, knocking him backwards. Bohrok emit a force field while rolling, making them invulnerable.

The Visorak are a common enemy in the game. They are distance specialists, but can preform long-distance jumps to bite the player. They also appear without warning, dropping from above on their spider webs.

The Vahki are an uncommon enemy in the game. They are much stonger than both the Visorak and the Bohrok. Thier most common method of attack is shooting a disk of energy from thier mouths. they can also preform a close range attack where they slam the ground, wounding the player. Some Vahki appear in thier walking mode, while others appear in the crawling mode. In thier crawling mode, they must be defeated twice. The first defeat causes them to jump up into thier walking mode, but with only half of thier original health.

During the game you will face six Zones (and an additional seventh one), with the boss of each zone being the Piraka in the zone name. Most of these zones are large outdoor environments with the exception of Avak's, which takes place in the Piraka stronghold.

At the end of the game (after completing it 100%) you receive as message from Balta congratulating you. As it zooms out on the island a short clip shows a whirlpool heading towards Voya Nui, this is a cliff hanger for the next story arc : the Toa Mahri. In the BIONICLE storyline, the "whirlpool" was opened by Axonn to give the Toa Inika a route to find the Mask of Life. 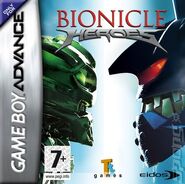 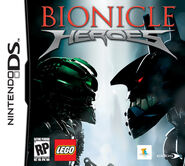