BIONICLE Stars was a BIONICLE sub-theme introduced in 2010, and was the last BIONICLE subtheme before BIONICLE's 2010 hiatus.

The Stars line comprised the six final BIONICLE sets to be released before the hiatus and was originally intended as a farewell to the theme on it's retirement. Each of the six sets represented an iconic BIONICLE race or character, upgraded with the latest parts and building techniques, and each includes a piece of Golden Armour to fit onto the Tahu figure. In the story, the Stars sets feature characters fighting on Bara Magna.

Mata Nui, who has now taken over the body of a huge prototype robot, needs to rejoin the planet Bara Magna with the planet fragments Bota Magna and Aqua Magna. However, the prototype robot is too weak to pull the planets together with a gravity blast. Makuta, haven taken over the giant robot the spirit Mata Nui once inhabited, arrives on Bara Magna to defeat his brother. As the two robots begin to battle, the veteran Glatorian Gresh finds a small door in Makuta's foot. He wrenches it open, only to find that it is filled with Rahkshi of Heat Vision and Skakdi. Gresh quickly ducks behind a rock as the enemies storm out. Later, Takanuva, the Toa of Light, emerges from the door. Gresh assumes he is another invader and attacks him. Discovering that they are fighting for the same side, they bond quickly and join the fight against the forces of Makuta. The Skrall, once defeated by Mata Nui in his Glatorian form, seek revenge and join the battle on the side of Makuta.

Tahu Nuva Mistika, the Toa of Fire, finds himself on Bara Magna. Mata Nui sends out the Kanohi Ignika, The Mask of Life, to turn Tahu into his mata form creating a suit of golden armour. It informs him that he needs to wear the armour to defeat Makuta and his minions. Before Tahu is able to take it, however, Makuta sends out a blast of energy that scatters the armour over the battlefield. He meets up with Takanuva and Gresh, who agree to help him recover the pieces. Meanwhile, Makuta threatens to destroy the planet with a blast of gravity, but Mata Nui manages to turn the blast away. It hits the fragments of Aqua Magna and Bota Magna, which begin to drift towards Bara Magna.

Eventually, they find all the pieces and Tahu puts the armour on, which causes raw energy to pulse through him and strike the Kraata of every Rahkshi on the battlefield, switching the Rahkshi off. Sensing this, Makuta gets distracted for a moment. Mata Nui sees his chance and pushes his brother into the path of an oncoming fragment of the planet Bota Magna. The fragment slams into his head, shattering the systems of the robot and killing him. The Skakdi and Skrall surrender, and Bota and Aqua Magna rejoin with Bara Magna, forming the original planet of Spherus Magna. In order to help the Toa, Matoran and Glatorian, Mata Nui uses his last reserves of energy to fill the planets surface with plants and wildlife, creating a paradise. The prototype robot dissolves, and Mata Nui returns into the Kanohi Ignika. He announces that he will stay in the mask, so he won't be part of any further conflict.

There was a contest for fans to name and characterize the combiner model of the BIONICLE Stars which can be built using all six sets. The model was given the name Gaardus and accepted into canon.

A teaser image for the line. 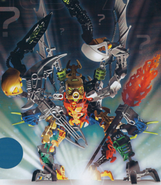