Brickipedia
Register
Don't have an account?
Sign In
Advertisement
in: Class 2 articles, Minifigures introduced in 2014, The LEGO Movie Minifigures,
and 3 more
English

Bad Cop[1], also known as Good Cop, Scribble-Face Good Cop, or Scribble Cop, is the secondary antagonist of the 2014 animated film The LEGO Movie, and a minor character in its 2019 sequel The LEGO Movie 2: The Second Part.

Bad Cop dresses in the black Lego police uniform, and also has grey gloves. His head is yellow, and has double-sided printing. One side portrays his "good" personality, and the other side portrays his "bad" personality.[2] His good side has an open smile and glasses. His bad side has sunglasses with grey lenses and a determined expression. Bad Cop also wears a black helmet.

His 71004 The LEGO Movie Series, Scribble Face Good Cop, variant comes with a double-sided head pieces. One side shows his bad side, while the other is a scribbled good side face. He does not have details on the back of the torso, despite having them in the movie.

Bad Cop works for Lord Business, and is his strongest and most ruthless henchman. He will do anything he can to help Lord Business achieve his goal of gluing the world together with the Kragle. Throughout the movie, he is obsessed with capturing Emmet whom holds the Piece of Resistance with him.

President Business meets with Bad Cop as his alter-ego, Lord Business, in his skyscraper's relic room, which is full of non-LEGO items from a world beyond theirs- our world. Business lets it be known that he is angry that Emmett escaped with the Piece, but intends to set everything in place--literally--with the Kragle (which happens to be a tube of Krazy Glue with some letters rubbed off). He seeks his lieutenant's true loyalties by having him fire the weapon-turned relic onto his own parents Ma Cop and Pa Cop, but his Good Cop side wins over. Business discovers this and rubs off that side of the officer with other powerful items (nail polish remover and a q-tip) before convincing him to demonstrate the Kragle's power.

Bad Cop tracks down Emmet, Wyldstyle, and Vitruvius in the Old West which leads to him destroying a bridge for the train they are on, but they were rescued by Batman in his Batmobile and he turns Bad Cop's car into baby carriage to lose him. Bad Cop and his "Kragle-ized" forces locate Emmet again via a tracking device shot on to him when previously saving Wyldstyle from the shot and attack and capture all the remaining Master Builders (except for Emmet and a few others who escape in a quickly-built submarine) during the attack on Cloud Cuckoo Land. Above the ocean waves, Bad Cop reports no other survivors amongst the surfacing wreckage to Lord Business--but fails to notice said survivors hiding in the only part that stayed intact: a double-decker couch that Emmet had built for the first time on his own.

"Build away...whatever your name is."
―Good Cop, to Benny before building a space ship

Bad Cop later helps Wyldstyle and the Master Builders fight Lord Business' forces after he was abandoned by Lord Business for double-crossing him in the tower, and draws on a new Good Cop side with a marker. After the Kragle was destroyed, Bad Cop reunites with his parents.[2]

Bad Cop in a cardboard cutout promoting The LEGO Movie

His "Good Cop" side 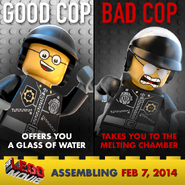 A poster featuring him (Notice the mirrored uniforms) 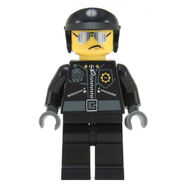 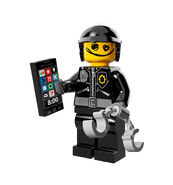 Good Cop building a heart in the The Emmet Awards - Ma and Pa Contest promotion video.

In The LEGO Movie 2 with Skeletrons 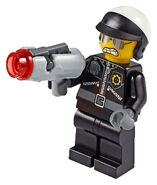 Deutsch Français
Community content is available under CC-BY-SA unless otherwise noted.
... more about "Bad Cop"
RDF feed
Appearances
70802 Good Cop's Pursuit
70819 Good Cop Car Chase
71004 The LEGO Movie Series
71213 LEGO Movie Bad Cop Fun Pack
70840 Welcome to Apocalypseburg! +
ArticleRating
2 +
Image
11739105214_074364e2a8_n.jpg +
Img1
11739099804 7e142f6dea n.jpg +, New_good.png +  and Good_Cop.png +
Img2
Scribble-Face_Bad_Cop.jpg +, Bad_Cop.png +  and Badcopgame.jpg +
Img3
Badcopyelling.jpg +, SFBC.png +  and VGScribble Cop.png +
Img4
BadCopdimensions.png +  and BadCop2222.jpg +
Img5
70840 (6).jpg +
InfoboxTemplate
Minifigure +
ShopDescription
Lord Business’s #1 henchman, whose loyalty is tested when he is forced to turn on his own parents. As the story unfolds, it is apparent that there can be a Good Cop inside him as well. +  and "There's still a Good Cop in me somewhere… … "There's still a Good Cop in me somewhere…"</br></br>Bad Cop may be a mean and ruthless bully, but he has a Good Cop half too – or at least he did until Lord Business used a powerful relic to erase his nice side’s face and keep his henchman’s conscience from getting in the way of his evil plans.</br></br>But is Good Cop gone forever? Could there still be a friendly smile lurking somewhere behind that cranky scowl? Emmet and his friends had better hope so, or they and the entire LEGO world may be doomed!y and the entire LEGO world may be doomed! +
Theme
The LEGO Movie +
Title
Bad Cop +
Txt1
Good Cop/Bad Cop +, Good Cop +  and Good Cop (Scribble-Face) +
Txt2
Scribble-Face +  and Bad Cop +
Txt3
Yelling +, Scribble-Face +  and Scribble Cop +
Txt4
Fun Pack +  and Apocalypse +
Txt5
Apocalypse +
Years
2014-2015-2019 +
Advertisement