The Hobbit: An Unexpected Journey
The Hobbit: The Battle of the Five Armies

Balin is a minifigure first released in the The Hobbit: An Unexpected Journey theme in November of 2012.

Balin's headpiece features black eyes with white pupils and bushy white eyebrows. His face has a wrinkled face with a serious expression, and he also has an alternate expression showing the same wrinkled face but instead now showing a smile. He has a unique hair/beard piece in white colouration. He also has a short cape in dark red. Like his cape, his body piece is also dark red, with a print of a large belt with a silver belt buckle on it. Balin also has short black minifgure legs.

Balin was part of the company assembled by Thorin Oakenshield that traveled to Lonely Mountain with Bilbo Baggins and Gandalf, to defeat the dragon Smaug and retake the mountain kingdom of Erebor.

He was the second dwarf to arrive at Bilbo's house at the beginning of The Hobbit. The one before him was his brother Dwalin and like him he played a fiddle.

Among the dwarves in The Hobbit, Balin was the second-eldest dwarf on the quest (behind Thorin), and loosely held the position of deputy leader. He led the dwarves in the escape from the spiders, and spoke for the party when the Elvenking captured them.

He was described as "always their look-out man": He spotted Bilbo approaching The Green Dragon Inn at Bywater, and was also first to spot the trolls' fire, as well as the elves in Mirkwood. He noted that not even a mouse had ever passed him on watch. Conversely he did not notice Bilbo (hidden by wearing the one ring) as lookout for the company after escaping the goblins in the Misty Mountains.

After this bit of trickery, Balin gained respect for Bilbo's abilities and was the only dwarf that volunteered to accompany Bilbo down the secret passage to Smaug's chamber. Of all the dwarves in the quest, Balin was the only one known to have visited Bilbo at Bag End after their experiences on the quest for the Lonely Mountains.

Balin left Lonely Mountain and entered Moria with Oin, Ori and others intending to establish a colony and reestablish the ancient kingdom, but the Balrog known as Durin's Bane had not left the place. Their small group was overrun by Goblins and wiped out. Balin himself was killed by a Goblin archer,ambushed while pacing through a hall regarding his dead friends. The tragic fate of Balin's colony remained a complete mystery to all Middle Earth until the arrival of the Fellowship of the Ring.

In The Lord of the Rings, the Fellowship discovers his tomb. His tombstone read "Here lies Balin, Son of Fundin, Lord of Moria". 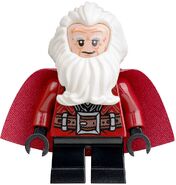 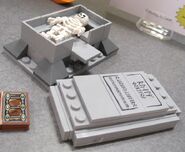 Balin in LEGO The Hobbit: The Video Game
Add a photo to this gallery