Brickipedia
Register
Don't have an account?
Sign In
Advertisement
in: Class 4 articles, Video game only minifigures, Animals,
and 2 more

A Bantha is a ram/musk ox-like creature from Star Wars. It appeared in LEGO Star Wars II: The Original Trilogy and LEGO Star Wars: The Complete Saga.

Banthas were sturdy and easily domesticated mammals used as beasts of burden that were found all over the galaxy. The common bantha, or Bantha majorus, was the most commonly known species, with the other subspecies considered generally rare. 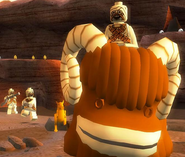 A Bantha with a Tusken Raider