Barbarian is a Minifigures Series 11 minifigure released on September 1, 2013.

The Barbarian has a long male hairpiece, the same one as Aragorn and Dastan have. He has a fierce facial expression with a stubble beard and two scars; one on his right eyebrow, and one on his mouth. He has beard stubbles and black eyebrows. His torso depicts him wearing a brown strap, which looks like a belt and is also shown on the back, and a bronze belt with circular markings on it. He has a muscular body with a scar on the torso's upper part. He has short leather shorts and leather boots, which are kept tight with small ropes. The Barbarian is equipped with two silver short-swords.

The term "barbarian" refers to a person who is perceived to be uncivilized. In idiomatic or figurative usage, a "barbarian" may also be an individual reference to a brutal, cruel, warlike, dangerous, and insensitive person. The Greeks and Romans used the term as they encountered many different foreign cultures, including the Egyptians, Persians, Medes, Celts, Germanic peoples, Phoenicians and Carthaginians. 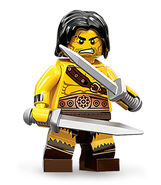 Add a photo to this gallery
Retrieved from "https://brickipedia.fandom.com/wiki/Barbarian_(Minifigures)?oldid=2002176"
Community content is available under CC-BY-SA unless otherwise noted.