Brickipedia
Register
Don't have an account?
Sign In
Advertisement
in: Class 3 articles, Minifigures introduced in 2013, The Hobbit: The Desolation of Smaug minifigures,
and 2 more
English

Regular, The Battle of the Five Armies

"Do it again, and you're dead"
―Bard in The Hobbit: The Desolation of Smaug

Bard is a minifigure from The Hobbit: The Desolation of Smaug released in December 2013.

Bard has Qui-Gon Jinn's hairpiece in black. He has black sideburns, a beard and moustache in the same colour. Bard's external facial expression shows him being angry. His torso depicts him wearing a brown jacket with fur on the inside, and two shirts beneath it: one olive, and one grey. His arms are dark brown and his hands are flesh-coloured. The torso printing continues on the legs. Shown on the legs' bottom are brown boots. Bard carries a longbow.

Bard, also known as Bard the Bowman, was a man of Lake-town, descendant of Lord Girion of Dale and father of Bain, Tilda and Sigrid. He killed the dragon Smaug, whence he earned the appellation "Bowman". He later fought in the Battle of the Five Armies, and afterwards became king of Dale. 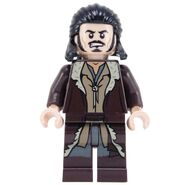 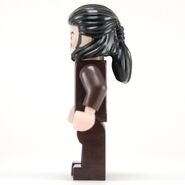 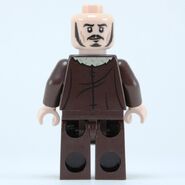 Back Printing (With hairpeice removed)

Bard next to the Master of Lake-town.

Poster with the original title for the final Hobbit film.

Bard in the 2014 SDCC giveaway packet.

Inside of the packet.

Français Nederlands
Community content is available under CC-BY-SA unless otherwise noted.
... more about "Bard"
RDF feed
Accessories
Bow +
Appearances
79013 Lake-town Chase, 79016 Lake-town Attack, 70917 The Battle of the Five Armies +
ArticleRating
3 +
Image
Bard_9.jpeg +
Img1
10902425783_97504fc8dd_o.jpg +
Img2
Bard_9.jpeg +
Img3
bard_the_bowman.JPG +
InfoboxTemplate
Minifigure +
ShopDescription
Bard the Bowman Bard the Bowman is … Bard the Bowman </br></br>Bard the Bowman is from Lake-town, and is a descendent from Lord Girion of Dale. Although some people will say he is grumpy and “grim-faced”, Bard is loyal to Lake-town and will do everything he can to protect his city, even from the dragon Smaug!tect his city, even from the dragon Smaug! +
Theme
The Hobbit +
Title
Bard +
Txt1
Regular +
Txt2
Regular (Second face) +
Txt3
The Battle of the Five Armies +
Variations
Regular, The Battle of the Five Armies +
Years
2013-2014 +
Advertisement