The Baryonyx is a Dinosaur that first appeared in the LEGO Jurassic World video game and was later released in physical form in the set 75935 Baryonyx Face-Off: The Treasure Hunt.

Baryonyx is a genus of theropod dinosaur which lived in the Barremian stage of the Early Cretaceous Period, about 130–125 million years ago. The generic name, Baryonyx, means "heavy claw" and alludes to the animal's very large claw on the first finger; the specific name, walkeri, refers to its discoverer, amateur fossil collector William J. Walker.

The holotype specimen, which may not have been fully grown, was estimated to have been between 7.5 and 10 m (25 and 33 ft) long and to have weighed between 1.2 and 1.7 t (1.3 and 1.9 short tons). Baryonyx had a long, low, and narrow snout, which has been compared to that of a gharial. The tip of the snout expanded to the sides in the shape of a rosette. Behind this, the upper jaw had a notch which fitted into the lower jaw (which curved upwards in the same area). It had a triangular crest on the top of its nasal bones. Baryonyx had a large number of finely serrated, conical teeth, with the largest teeth in front. The neck formed an S-shape, and the neural spinesof its dorsal vertebrae increased in height from front to back. One elongated neural spine indicates it may have had a hump or ridge along the centre of its back. It had robust forelimbs, with the eponymous first-finger claw measuring about 31 cm (12 in) long.

Now recognised as a member of the family Spinosauridae, Baryonyx's affinities were obscure when it was discovered. Some researchers have suggested that Suchosaurus cultridens is a senior synonym (being an older name), and that Suchomimus tenerensis belongs in the same genus; subsequent authors have kept them separate. Baryonyx was the first theropod dinosaur demonstrated to have been piscivorous (fish-eating), as evidenced by fish scales in the stomach region of the holotype specimen. It may also have been an active predator of larger prey and a scavenger, since it also contained bones of a juvenile Iguanodon. The creature would have caught and processed its prey primarily with its forelimbs and large claws. Baryonyx may have had semiaquatic habits, and coexisted with other theropod, ornithopod, and sauropod dinosaurs, as well as pterosaurs, crocodiles, turtles and fishes, in a fluvial environment.

It was revealed that there are some surviving Baryonyx populations on Isla Nublar, but would now face a new danger, alongside many other creatures, in the form of an erupting volcano. These clones have a crocodile-like armored back and crocodile-like underbelly, a long but broad snout which makes it look like a caiman, a less pronounced notch in the upper jaw, lacks the triangular crest on the top of its nasal bones, pronated wrists like all of InGen’s cloned theropods, a much smaller thumb claw, and very different teeth more like a needlefish. The coloration is mostly a drab grey with greyish black on the back with turquoise sprinkles all over its back, with a creamy white belly, and turquoise blue on the eye orbit and snout.

One individual was seen walking out of a sewer tunnel, as it was about to attack Claire Dearing and Franklin Webb in the control room as lava was pouring in. Despite being pelted with lava, it remained unfazed and determined to get to its potential prey. Before it could attempt to devour them both, Claire and Franklin managed to lock it inside the underground control center, where it would have likely been killed by the surging lava.

At least three Baryonyx were captured to be sold off at the Lockwood Manor Auction. two Baryonyx were briefly seen escaping the estate with all the other dinosaurs, while another one that was bought at the auction was last seen being loaded onto a cargo plane to be delivered to its buyer. 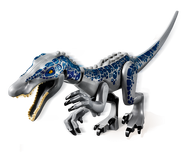