A Bat is a small, single-stud animal part. Typically black, they have also appeared on occasion in dark gray, representing statues, and have never yet been printed. They are positioned sitting upright with wings outstretched. Introduced as part of the Fright Knights subtheme of Castle, they proved to be a versatile animal part and have appeared in multiple lines since.

There had been legends and tales of enormous Bats living deep within the Caverns of Nathuz, but until the invasion of the monsters none had ever seen such beasts. But now with the arrival of the Golems, the Bats have started to pour out of the caves at night to plague the neighboring countryside.

Lose a battle against a monster and he will take as many Health away from your Hero as his strength category shows.

Many bats in LEGO Racers

A bat in the Build mode in LEGO Racers 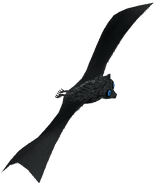 A bat from the Rock Raiders video game