Bat-Mite is a DC Comics minifigure who appears in LEGO Batman 3: Beyond Gotham. He also appears in physical form in the 71026 DC comics collectible minifigure series. He first appears in the special, LEGO DC Comics: Batman Be-Leaguered, which aired on Cartoon Network.

Bat-Mite is an imp from the Fifth Dimension who idolizes Batman, and has shown that by wearing a homemade Batsuit. Using his cosmic powers of reality warping, he follows Batman around both trying to help him or to cause mischief. Regardless, he tends to cause more trouble then assistance whenever he's around.

In LEGO Batman 3: Beyond Gotham, Bat-Mite often breaks the Fourth Wall, as he teaches the user how to use certain controls. Bat-Mite can be unlocked by completing every quest for him on every mission. 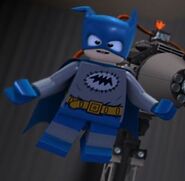