Batgirl, or Barbara Gordon, is a superhero and ally ofBatman and Robin and made her first appearance (in a design based off of her DCAU appearance in Batman: The Animated Series) in the 2008 video game LEGO Batman: The Videogame. She was released physically for the first time in 50003 Batman as a microfigure in 2013. She was then released as a minifigure in 76013 Batman: The Joker Steam Roller in 2014.

Batgirl has a cowl mould that combines the cowl and her flowing red hair, and she has two expressions, happy and angry. Her torso, arms, hips and legs are all black, while her hands are pearl gold. Her torso is printed with her bat symbol, utility belt, and purple lines depicting the plates of her armour. Her utility belt and suit design continues onto her back. She is printed with feminine curves. She comes with a bright purple version of Batman's cape and a Batarang. 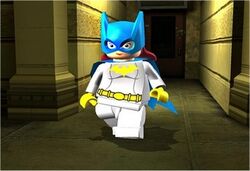 Her outfit closest resembles her modern "New 52" version, with the blue lines and purple cape, but throughout most of her appearances in comic history, Batgirl has worn a yellow and black suit with blue highlights.

Being the daughter of Commissioner Gordon, Barbara Gordon grew up in a household filled with police officers and their stories. After graduating from college at an early age, Barbara decided that she wanted to join the Gotham City Police Department and follow in her father's footsteps, but he wouldn't allow it. One night, at a Masquerade Ball, Barbara wore a homemade "female Batman" costume as a jive against her father and ended up stopping a planned kidnapping on billionaire Bruce Wayne by Killer Moth. Realizing that this was how she could fight crime, Barbara decided to keep the Batgirl moniker.

Batgirl is romantically interested in Nightwing and is friends with Supergirl, despite Batman-family members not normally getting along with their Superman-family counterparts. Batgirl has rivalries with Batman's female enemies, particularly Poison Ivy and Harley Quinn. She has also mentored Stephanie Brown.

Batgirl re-appears in LEGO Batman 2: DC Super Heroes but plays no role in the game. She can be unlocked on consoles by collecting 65 gold bricks, and going to rooftop in the west part of the Power Plant area, near Killer Moth, then building the door. Just like in the previous game, she costs 100,000 studs.

In the portable versions, Batgirl is unlocked for purchase after finding the first minikit in level seven, The Batcave.

By day, Barbara Gordon, is the bookish daughter of the Gotham City Police Commissioner, Jim Gordon. By night, Barbara dons a cape and cowl as Batgirl, committed to justice like her father. While her a utility belt is equipped with Batarangs and other crime-fighting gadgets, her greatest tools are her brilliant mind and her unwavering determination.

Although she’s new to being a Super Hero, Batgirl is every bit Batman’s equal as a crime-fighter. They may disagree about the rules and methods, but Barbara Gordon’s experience as a police officer and her desire to protect Gotham City make her the perfect partner when things get tough and villains are on the rise. She might even have a few things to teach the Dark Knight about busting bad guys! Bat-Fact: Has been known to take out the villains before Batman can even park the Batmobile.

With the help of the Bat-Merch Gun, Batgirl™ has been covered head-to-toe in collectible Batman™ merchandise. She’s got it all – the ultra-fashionable hoodie, the limited-edition utility belt, and even fistfuls of officially licensed Bat Bucks, accepted at participating stores all across Gotham City. This stuff may not help her fight crime, but it could definitely improve her social media presence!

Pulling double duty as the Police Commissioner of Gotham City and the newest member of the Bat-family sounds tough, but Barbara Gordon is just that good. Still, even the hardest-working cop-slash-crimefighter needs a break once in a while. That’s when Barbara changes into her Vacation Batgirl™ wetsuit and grabs her surfboard for some thrilling (but very well-planned) fun in the sun!

When Commissioner Barbara Gordon™ decided to help out Batman™, this is NOT what she had in mind. Thanks to a blast from the Bat-Merch Gun, she’s found herself wearing a bright pink crime-fighting suit. How is Batgirl™ supposed to swing stealthily through the shadows and bust bad guys in this outrageous outfit? Looks like they’d better try that merch gun one more time!

Batgirl with Man-Bat in LEGO Batman 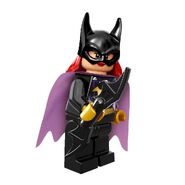 The New 52 version of Batgirl in LEGO Dimensions.