Bathilda Bagshot is a Harry Potter minifigure who appears in LEGO Harry Potter: Years 5-7. Bathilda was the author of the book A History of Magic, and a friend of Albus Dumbledore before she was killed by Nagini, who took her form. She is fought in Year 7 Part 1 Level 3 "In Grave Danger".

Bathilda Bagshot (fl. 1881—1997) was a magical historian and the author of A History of Magic and approximately ten Bathilda Bagshot's books. A History of Magic is used in the Hogwarts School of Witchcraft and Wizardry of the same name, taught by Professor Binns. She lived in Godric's Hollow, and was murdered around December, 1997, after which her corpse was animated by Lord Voldemort to contain his snake Nagini.

Bathilda was also the great-aunt of Gellert Grindelwald, the infamous dark wizard who was defeated by Albus Percival Wulfric Brian Dumbledore.

She died sometime before Harry Potter and the Deathly Hallows, as Nagini took control of her dead body. 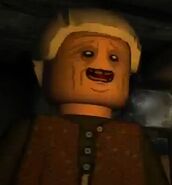 Nagini disguised as her.