The Battle Droid Commander is a Star Wars Minifigure.

Droid commanders were part of the OOM series of battle droid made by Baktoid Combat Automata, along with the Security Battle Droid and Pilot Battle Droid. Origanally the only free thinking droids, they usually commanded small squads of security droids or huge forces of droids on Banking Clan frigates, enormous star cruisers or AAT tanks.

These droids are sometimes led under a General or higher rank, such as Asajj Ventress or General Grievous. When on the ground, many watch and fight while inside an AAT or at the front of the battlefield, leading their battle droid troops. Battle droid commanders like to think of themselves as superior to standard B1s but with the creation of the B2 Super Battle Droid, which also had limited free thought, some of the commander droids' authority were taken away.

Four versions of the Battle Droid Commander have been released: the first had yellow markings on both the head and torso pieces, much like the original Pilot and Security droids. These were more authentic; however, such an innovation was difficult for those who did not want to lose its parts.

Another version, introduced in early 2008, had an all yellow torso, but came with the new model battle droid arms. This way, a gun could be held upright in one hand when the newer model was released around the same time.

The third version, released in late 2012, only had a small yellow marking on an otherwise completely plain droid torso. It also had a yellow strip on its head to signify it was a commander droid. It also came with a blaster pistol, which could be held upright, like all other battle droids released since late 2007. 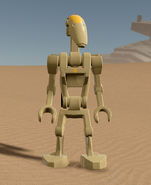