Batzarro is the Bizarro counterpart of Batman. His origin is unknown, but he claims to have shot and killed his parents. (In contrast to how Joe Chill shot and killed Batman's parents.) Batzarro frequently calls himself the "World's Worst Detective". Unlike most Bizarro People, who were created by either Bizarro or Lex Luthor, he was created by the Joker.

After Bizarro zapped the Justice League with the LexCorp duplicator ray, he managed to create Bizarros of Batman, Green Lantern, Wonder Woman, and Cyborg. Batzarro was Batman's clone who claimed he was the "World's Worst Detective", after his creation. He then joined the "Bizarro League" with Bizarro #1, Greenzarro, Bizarra, and Cyzarro. He and the league traveled to the Bizarro World, where they fought Darkseid's hunger dogs. However, they were joined by the Justice League, who decided to create a technology against Darksheid's machine. He and Cyzarro, Batman, and Cyborg created the machine. However, it malfunctioned. The superheroes then decided to load the machine with a massive amount of rocks, breaking it. The plan worked and Darkseid fled. Batzarro then lived peacefully on the Bizarro planet with the league. 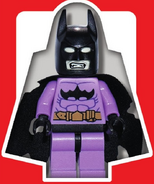 In LEGO Batman 3: Beyond Gotham.