Baze Malbus is a minifigure released on 2016.

"I'm one with the Force, the Force is with me!"
―Baze Malbus

Baze Malbus was a human male born on the desert moon of Jedha fifty-three years before the Battle of Yavin. Once a devoted member of the Guardians of the Whills, Malbus became a freelance assassin during the age of the Galactic Empire. Nevertheless, he maintained a friendship with Chirrut Îmwe, who also served with the Guardians. Following the destruction of Jedha City, Malbus and Îmwe became part of the Rebel group known as Rogue One. After Îmwe's death in an explosion during the Battle of Scarif, Malbus rushed the Imperial death troopers and was killed by a C-25 fragmentation grenade. 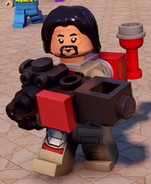