Brickipedia
Register
Don't have an account?
Sign In
Advertisement
in: Class 2 articles, Video game only minifigures, Minifigures introduced in 2006,
and 2 more

Beach Troopers are Stormtroopers that have shed their armour for swimwear. They are enemies which generally appear in areas of the LEGO Star Wars games which can only be accessed in Free Play mode. Beach Troopers can also be purchased and be selected for use as a playable character.

Beach Troopers wear swim briefs (represented by blue hip joints) and a standard Stormtrooper helmet. In LEGO Star Wars II: The Original Trilogy, they are depicted without a shirt and instead have a printing pattern for a bare chest on their torso. These troopers are equipped with blasters and have the ability to grapple, jump, and unlock Stormtrooper panels.

In LEGO Star Wars: The Complete Saga, their appearance was changed: As well as their swim briefs, Beach Troopers in this game also wear blue and red striped tank-tops.

In LEGO Star Wars: The Force Awakens, the stormtroopers are once again shirtless, but this time they are very muscly. They wear First Order Stormtrooper helmets, and swimming shorts in a black and red pattern. These troopers also have light and dark skin tones, appearing as FN-2112 and Stormtrooper (Hot Tub) respectively when unlocked.

In LEGO Star Wars: The Skywalker Saga, the troopers are seen sporting a similar appearance to their original variant. In the game, they are first seen on the Tantive IV when R2-D2 and C-3PO are tasked with escaping the ship under siege by the Empire. When poking around, you can come across the room where a group of these troopers can be seen in a hot tub. The stormtroopers do not attack the player when they are encountered unlike their normal stormtrooper counterparts and other variations of the Beach Trooper, and do not appear to be armed. The only noticeable difference that can be made out is the lack of the iconic blue swimwear, as it appears to be have been replaced with a pair of boxers instead. Unlike most of the troopers appearances, the room that they can be located in does not require free play to be opened, and isn't meant to be secretive.

Stormtroopers were the most common foot soldiers of the Galactic Empire in the Star Wars universe. Apparently, during or prior to the events of the games, groups of off-duty Stormtroopers chose to change into swimwear while keeping their Stormtrooper helmets on, and visit spas or pools, commonly found on various sections of the Death Star, with an exception of being seen on the Tantive IV in LEGO Star Wars: The Skywalker Saga. 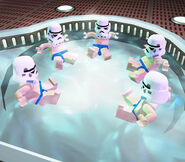 Beach Troopers in a jacuzzi

In The Force Awakens