Beast Boy is a Super Heroes minifigure who first appeared in LEGO Batman 3: Beyond Gotham. He appears in the set 76035 Jokerland alongside two of his fellow Titans, Robin and Starfire.

Beast Boy, also known as Garfield Logan and Changeling, is a superhero with the power to shape-shift into members of the animal kingdom. He is a regular member of the Doom Patrol and the Teen Titans.

Garfield received his powers when an untested serum was used to protect him from a deadly virus transmitted through an animal bite. The serum cured him, but resulted in his green skin and animal-morphing ability. Orphaned at a young age, he eventually found a loving family as the adopted son of Mento and Elasti-Girl, leading members of the Doom Patrol. Raised by them as a kid hero, he grew up and moved to the Teen Titans later in his career. He is best friends with fellow Teen Titan Cyborg. His special abilities make him a fearsome and unpredictable opponent, although he has a very easy-going nature and lacks intelligence and maturity. Despite his prankster personality, he makes up for it in proving to be an invaluable asset to his team and friends. 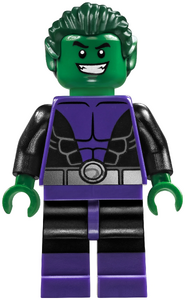 As a gorilla in LEGO Batman 3: Beyond Gotham 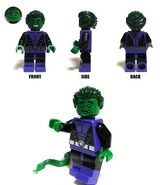 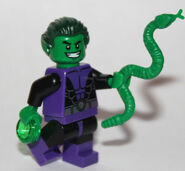 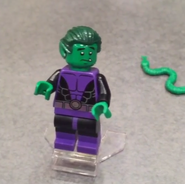 Beast Boy on a super jumper

Français
Community content is available under CC-BY-SA unless otherwise noted.
... more about "Beast Boy"
RDF feed
Appearances
76035 Jokerland
71255 Teen Titans Go! Team Pack +
ArticleRating
2 +
Image
'"`UNIQ--tabber-00000001-QINU`"' +
Img1
BeastBoy.png +  and Beast_Boy_Lego_Batman_3.jpg +
Img2
Teen Titans Go! Beast Boy.jpeg +  and BB ld.JPG +
Img3
BeastBoyDCSuperVillains.png +
Img4
BeastBoyGorillaDCSuperVillains.png +
InfoboxTemplate
Minifigure +
ShopDescription
When he was a young boy, Gar Logan became … When he was a young boy, Gar Logan became sick with a rare disease. The untested cure for his illness not only saved his life, it also changed his skin to green and gave him the power to transform into any animal imaginable. As Beast Boy, he's the wise-cracking member of the Teen Titans that relies on his sense of humor as much as his shape-shifting ability to defeat the bad guys.Agility: 9<br/>Fighting: 7<br/>Strength: 9<br/>Intelligence: 6<br/>Speed: 8