Beetle is a Marvel Super Heroes minifigure released in 2013.

Beetle was an enemy of Spider-Man and worked for Dr. Doom.

Spider-Man and his team were assigned by Nick Fury to protect J. Jonah Jameson after he went on tirade to expose Beetle, which prompted him to try to assassinate Jameson. Things became personal for Spider-Man when Mary Jane Watson was caught in the crossfire. Most of the team were defeated with knockout gas, and Spider-Man fought Beetle on his own, until the team woke up and defeated Beetle, with no causalities but most of the DBC building destroyed. Jameson was revealed not to be in his office, instead reporting on a monitor and Beetle was locked up.

Beetle later escaped and attacked Agent Coulson, the only agent ever to take him down, while he was on a date with Aunt May, much to Peter's horror. Spider-Man and Phil try to take down Beetle while protecting May, when he kidnaps her. Aunt May was brought to the U.S.S. Intrepid and defeated when May "accidentally" activated a jet's thrusters, frying Beetle's armour before he was beaten by Spider-Man and Coulson.

Spider-Man and Hawkeye later teamed up to take down Beetle, who had returned to New York City to have his revenge on Spider-Man, but failed and was locked back up.

Beetle was later freed and became part of the Sinister Six, which also included Doc Ock, the Lizard, the Rhino, Electro, and Kraven the Hunter, but was defeated and locked up again. 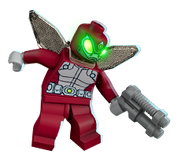 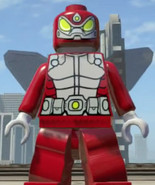