Beorn is a The Hobbit: The Desolation of Smaug minifigure that was released in 2013.

Beorn was a Northman, the first Shape-shifter, and a Beorning chieftain who lived in the West of Mirkwood, near the Carrock. During the Quest to reclaim Erebor he provided shelter for Thorin Oakenshield and Company and later participated in The Battle of the Five Armies, when he killed Bolg, son of Azog, while defending Thorin. This is according to the plot of The Hobbit novel; in the films he was part of a race of shape-shifters all but wiped out by Azog. He later took part in the Battle of the Five Armies, arriving with Radagast and the Great Eagles, but did not engage Bolg. 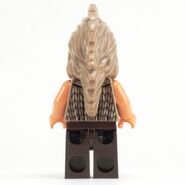 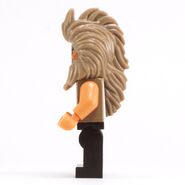 With a skeleton head 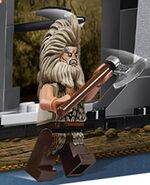 Beorn spying in his bear form in LEGO The Hobbit: The Video Game.
Add a photo to this gallery
view · talk · edit Middle-Earth minifigures
Retrieved from "https://brickipedia.fandom.com/wiki/Beorn?oldid=1977848"
Community content is available under CC-BY-SA unless otherwise noted.