Brickipedia
Register
Don't have an account?
Sign In
Advertisement
in: Class 4 articles, Articles in need of expansion, LEGO Film only characters

Bianca is Finn's sister as well as the (unintentional) main antagonist of The LEGO Movie 2: The Second Part. Her role as the main antagonist is primarily because her brother is afraid she would destroy everything he built. She is also Queen Watevra Wa'Nabi's creator. Bianca made her debut, albeit unnamed, in the first LEGO Movie as a minor character.

Bianca likes playing with her Duplo Aliens, but she and Finn can fight at times since she wants to join his game, which, to him, would cost him his freedom to play. However, it is later revealed that Rex Dangervest is the reason behind (or, in the real world, personification of) their argument, and that Bianca only wanted to play. 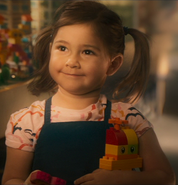 Bianca as a toddler