Big Chief Rattle Snake[1] (alternatively written as Big Chief Rattlesnake),[2] also known as Häuptling Schwarzer Adler (Chief Black Eagle)[3] or Chief Buffalo,[4] is an Indian minifigure from the Western Indians theme that was introduced in 1997 and has appeared in four sets.

Big Chief Rattle Snake wears a brick yellow shirt and bright red pants, and his torso and legs feature additional printing with blue and white patterns and a white necklace. He has a large white feather headdress decorated with black, red, blue, and gold. His head is printed with red triangular tribal facepaint and a visible nose. He often wields a tribal spear with feathers with along with a shield, and sometimes a black rattlesnake. The rarest variation, featuring the LEGO logo printed on his back, was exclusive to LEGOLAND parks.[source?]

Chief Black Eagle is the father of Sui, residing in the Chief's Teepee at Rapid River Village. In the Time Cruisers comics, he finds Tim Timebuster and Ingo with Sui's unconscious body, so he mistakenly believes them to be responsible and orders his tribesmen to attack. They bring Tim and Ingo back to their village, where the Chief proclaims that the war council will decide their fate. However, Ingo breaks them free of their ropes and they escape. 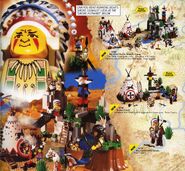