Bill Ding is a character from the LEGO Island series, appearing in the first two video games: 5731 LEGO Island and 5774 LEGO Island 2: The Brickster's Revenge.

Bill Ding can be found in the building areas for the jet-ski, racecar, dune buggy, and helicopter to help the player make the vehicles. In each area he puts on a different hat which influences his personality in that section. He can also be found walking around LEGO Island, sometimes multiple times with the different hats from the building sections.

In the PC and Playstation versions of the game, he initially helps Pepper build his house by slowly adding the pieces Pepper gains while delivering pizza. Later, after the Brickster escapes and takes apart LEGO Island by tearing up the Constructopedia, he rebuilds buildings when Pepper finds pages. Bill Ding also helps Pepper rebuild the bridge on Castle Island when he dives for parts.

Bill Ding first appears in the Game Boy Color port when he's blocking the road, trying to repair it, and needs a pickaxe. After Pepper gets him the pickaxe, he lets Pepper through. Later on, he can be found at the Space Port and adds a piece to the Space Shuttle Pepper found, allowing the latter to go to OGEL Island.

The earliest mentions of Bill Ding during the development of LEGO Island[1] reference him as "Bill Ding: the wrecking company guy" and state he would have been located at the Information Center.

During the development of LEGO Sea Challenge, Bill Ding was at one point planned to be situated beneath The Platform.[2] He then would have helped the player build a PPU (Personal Propulsion Unit) so they could explore the Phanta Sea.

Bill Ding originally was planned to be in Island Xtreme Stunts. However, he was removed from the game as his name got trademarked by another company.[3] His role got as far as having him being apart of missions and dialog planned for it.[4][5] The LEGO Island 3 Character Bible, used for reference during the development of Island Xtreme Stunts, mentions that Bill Ding was the friend the Infomanaic stated he was going to make to the Brickster, which led the latter to go mad. 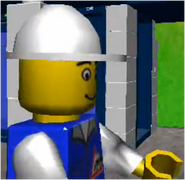 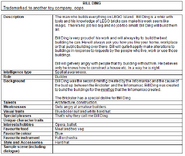