Bith are alien minifigures from the LEGO Star Wars Theme, who first appeared in the video games LEGO Star Wars II: The Original Trilogy and LEGO Star Wars: The Complete Saga. They are non-playable characters with an all black shirt, gray pants (black in mini-movies), flesh tone skin and a new large head piece. They made up the four musicians at Mos Eisley Cantina, however in the games, there are only three of them, two mouth instrument musicians and a drummer, present. In The Complete Saga game, when Music is turned off, they do not play music and instead look bored and confused without their instruments. In 2014, the Bith Musicians were finally released in a physical form for the first time in 75052 Mos Eisley Cantina.

The Bith were a species native to Clak'dor VII. The Bith were one of the galaxy's most ancient civilizations, with a history going back millions of years. This antiquity garnered respect in certain quarters, such as among the Gree, who gave them more respect than other, "younger" species. Their society was highly regimented, with everything from mate selection to political leadership controlled by sophisticated computer programs.

Made easily accessible to the Galactic Republic circa 5500 BBY with the blazing of the Rimma Trade Route, the Bith were moving around in the galaxy by the time of the Great Sith War, as their homeworld was part of space greatly explored by the Republic at that time. Considered part of the civilized galaxy by the time of the Jedi Civil War, the Bith homeworld was located in space controlled by the New Sith Empire during the Republic Dark Age, though it was not directly affiliated with the Empire. When the Republic recovered following the Ruusan Reformation the Bith became a vocal voice in the Galactic Senate, gaining a seat in the Senate Building on Coruscant.

Circa 300 BBY, the Bith city-states of Nozho and Weogar engaged in a massive civil war using biological weapons over patent rights to a new hyperdrive. The aftermath of the Nozho–Weogar War destroyed Clak'dor VII's ecosystem and crippled the Bith industrial capacity, forcing the Bith to retreat to sealed cities and rely on imported goods and machinery to keep their society functioning. The Y'bith, a subspecies of Bith, were descended from Bith whose genetic code was altered in the aftermath of a biological attack on Nozho. These "ghost Bith" resettled on Clak'dor IV and developed their own society, somewhat estranged from the Bith mainstream.

The war also brought out a strong pacifistic streak in Bith culture, electing vocal Senate members who pushed for galactic disarmament. While they attempted to remain neutral during the Separatist Crisis they were eventually coerced into supporting the Confederacy of Independent Systems against the Republic by Confederate leader Count Dooku.[19] Both the Clone Wars and the rise of the Galactic Empire made the Bith uneasy about conditions in the rest of the galaxy, with most Bith choosing to wait out the dark times within Clak'dor VII's sealed cities.[1] After the Clone Wars ended, the Bith did not resist the Empire, instead putting their technical expertise at the service of the Imperial war machine. The Bith were horrified by the Empire, however, and were among the first species to be liberated from the Eriadu Authority by the New Republic in 5 ABY. The Bith did not emerge fully from their isolation until 8 ABY, shortly after the Hapans rejoined the Galactic community. A Republic stronghold during the Thrawn campaign, the Bith homeworld would go on to avoid invasion by the Yuuzhan Vong.

The Bith in LEGO Star Wars II: The Original Trilogy

The Bith in LEGO Star Wars: The Complete Saga 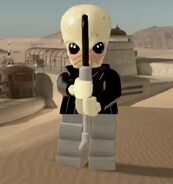