Black Bart,[1][2] also known as Brian Bandido,[3] was one of the three bandits featured in the Western theme, along with Flatfoot Thompson and Dewey Cheatum.

Black Bart wears a black jacket and belt with a blue shirt, black scarf, black legs, and an earth orange cowboy hat. In 6790/6791, he appears with a white scarf and dark grey legs.

In 5784 Soccer Mania, Brian Bandido's neck scarf is blue instead of black, and he wears it reversed so it does not cover his mouth. 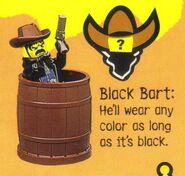 From the September-October 1996 LEGO Mania Magazine

From the September-October 1996 LEGO Mania Magazine